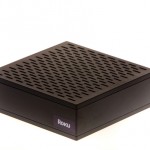 This $100 dollar wonder runs Linux. At least this is why I believe it does. By looking at their agreements we can see:

Certain components of the software included with the Roku Product are subject to separate license
terms, including “free” or “open source” software (“Separately Licensed Code”). Some of the Separately Licensed Code is licensed
under the terms and conditions of the “free” or “open source” license and is not subject to the License above or the Limited
Warranty below. As required by the terms of the relevant Separately Licensed Code licenses, Roku makes the “free” and “open
source” code provided under such licenses, and Roku’s modifications to such code, available on Roku’s website, at no charge. The
following third party software is also included.

Which does not defiantly mean that it runs Linux but:

This product includes software developed by the OpenSSL Project for use in the OpenSSL Toolkit (http://www.openssl.org/).

Which also does not defiantly mean Linux, but:
With it’s small form factor and the fact that it is sub-$100 and it runs off of flash memory, I believe it does.

If this is the case, then I would love to see how to stream Netflix on a normal Linux/Mac box without having to use IE.

I believe that if they are implementing IE and Windows media formats behind the scenes that they might be infringing on some sort of License agreement with Microsoft. Which sucks.